Two castels and ... a toilet

The restaurant in which we have been was proudly announcing that it serves as restaurant and hotel since 1790. The food was decent, with an excellent soupe de lentilles, but the toilet was the one that really made a difference. The pictures speak about the size. I wonder how a taller guy would manage to wash his hands in the tiny space over there. Probably this is why they have included an antiperspirant as well! :) 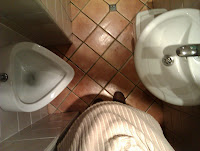 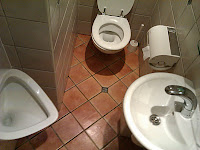 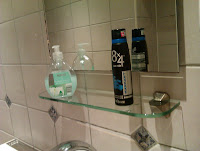 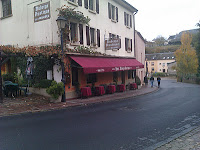 The restaurant is called Auberge Rustique and it is located in the nearby of the Chateau Beaufort. The castle, in ruins since the beginning of the 18th century, did not know any modern transformation. Its remains tell a nice story about how wealthy people were living a few hundreds year ago.


We have also visited Chateau Larochette. It is located on a high rock, from where the name (rocher=rock), and has a nice view on the bellow valley. The castle was shared by several noble families, but it went to fire in 1565. Since then, it was never rebuilt, due to the quarrels between the inheritors.

Both castles tell the story of an age when the rooms where small and the walls where thick, and comfort was a very strange word… If in the area, take a car and visit them. You may also find some more pictures and more information about the castles in Luxembourg (as well as in other countries) by vising the site/blog castles.nl.
- noiembrie 02, 2011