Well, I do not need to comment much on this :)) 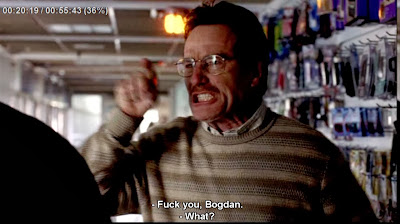 The image is from the pilot episode of Breaking Bad, an atypical TV series who run for five seasons to be ended this autumn.

Bogdan is an episodic character, owner of a car-washing and garage small business. He employs the main character of the TV series, Walter. The story happens in the southern part of the US. Walter is American, a genius in Chemistry, overqualified for his teaching in a highschool. Underpaid by the school, he finds part-time employment as a non-qualified worker for Bogdan, a Romanian immigrant. The better off Romanian uses the phone to talk with some co-ethnics, therefore one may even hear some spoken Romanian in that episode!

[the series is quite good, with a nonlinear action, realistic characters that transform from a season to another, and not so many episodes. A little bit too violent sometimes, but otherwise entertaining, at least in the first two seasons - I have not seen all the series, yet, but there are good signs. One might also want to know that Breaking Bad's growing audience in the US rocketed to a Top 3 record in TV history for the September 2013 finale. I thank Cătă for pointing me to the series some months ago.]
- octombrie 04, 2013