Her (aka And I Miss Her)

I missed her. After so many words between us … she did not show.

I went through the alleys with her sight in my heart, crossing the green, almost floating, like a fluffy cloud pushed by the wind, like a whiff through the hair of so many kisses. It´s summer, the park is vivid all night long. A bunch of teenagers, playing a guitar, two blonde women remembering storing from their youth, a dark curly one, kissing some placid guy, another blonde, dark eyes, getting out of the car, with her beau, hand in hand, the guardians sweeting in their uniforms, three dogs, and their masters, another couple kissing. The beauty of crickets, playing their songs, a drummer whispering words of love, a tired captain admiring the hips of his young future-wife, smiles, bright eyes, shortness of breath, young people, not-so-young people, dogs, laughing, happiness, joy. But she … she did not come. Another alley, then a new one, I repeat the round. The same faces, enjoying life, in the shadow of the night, with so many clouds looking through the stars, floating…

I really missed her. She used to chase me at every single trip into the park. She blinded me with the brightness of her eyes. She pushed me in a bush, once. She was everywhere, at every hour, mingling and mangling my life. But tonight … she did not come.

I was calling her names. Mihaela, Cristina, Vyanna, Mayflower (why not?), Rainbringer (yap!), Golden Blue… I was speeding up. The best time since my injury, told the voice in my ear, while I was rolling thinking of her, trying to understand... A certain number of minutes per lap, or per kilometer, who cares? 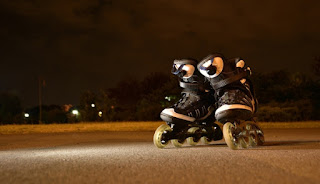 Suddenly, a girl jumped in front of me, scared by a barking dog. She made me fall dow, the seventh time in 36 years.

She did not come!

Garbage bags all over the alleys waited for her, but she, the cleaning car (did I say that Romanians are romantic enough to have no “it” in their language and to call cars as “she”?), she did not come…

It was my chance, to think clearly, behind this screen, through fluffy clouds and happy crickets, over the street and a little farer. The words came easy, although in a clumsy dance, one thousands at once, like a girl with one thousands delightful faces, and I missed her.