Dăncilă is the family name of the Romanian prime-minister. Her first name is Viorica, and she is a treasure for Romanian media, which means she brings a lot of money in Facebook and Google pockets due to traffic caused by her perpetual mistakes. When I say mistakes, I refer to language errors, most of them due to her particular understanding and mastering of Romanian language, that happen to be her only mother tongue. For instance, a week ago, she miss-called “protestants” the “protesters” (i.e. protestanți instead of protestatari).

But do you know the annoying captchas, isn’t it? The company is currently owned by Google. And they ask you again and again (minutes in the row in my case!!) to click on some images in order to prove you are human. It seems that I am not human enough for Google. However, this is not a problem, I can still be amazed by their understanding of Romanian language. 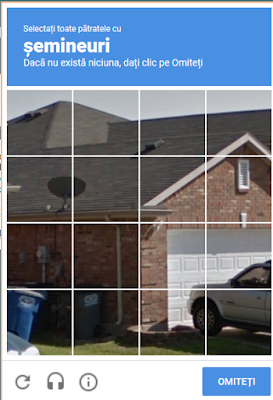 For instance, they translate chimney through “șemineu”, which happens to mean "fireplace". I have looked for “șemineu” in DEX (that is the Romanian version of Webster), and it does not look as designating a chimney, but a fireplace.

While Webster says that using dialects one may also designate fireplaces as chimneys, its main meaning remains the one of pipe carrying the smoke outside the building, in particular that part on the roof that is supposed to be used by Santa Claus. In Romanian language this would be translated by coș or horn.

However, Google Translate insists that chimney should be called șemineu in Romanian...

Therefore, I suppose Viorica Dăncilă should work for Google (and reCAPTCHA), and illuminate the entire world with her intelligence, while leaving Romania to develop in peace, isn’t it?