Love is two people dancing in the kitchen

“Love is two people dancing in the kitchen.” A simple message on the wall of my AirBNB accommodation in Zagreb.

One may look at the message in a mundane manner, focusing on the kitchen. However, the story is deeper. It talks about durability. 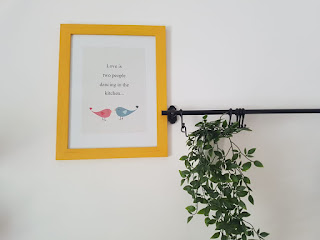 Love builds in mundane places, to erupt joyously in the street, to bring glamour and shining, to keep people laughing. But the essence is there, in the mundane conversations in the nocturnal bed, in doing small things together in the kitchen, in random touches and talks, non-sexual, unintended, banal, almost fade. They offer the opportunity to enjoy life at its grassroots, to experiment with each other, to build things from nothing, to mutually calibrate reflexes, actions, smiles, signs, passion.
Love is beyond its visible expression, it recovers from ashes, by building common actions, and kitchen is just a simple metaphor, to understand the crucible where passion starts to actually rule the game.

Movie-stars are at the opposite. Time and resources limit their capacity to bond. Unlimited resources provide the continuous temptation to spend all time in exposed places, experimenting fantastic rush, exquisite action, and adrenaline, but lacking the opportunity offered by small things, nocturnal small talk, and … kitchen love. Limited time sets even more severe boundaries, and gives no space for such mundane experiences that help couple continuously reinvent their passion. Somehow this explains why their dancing in the street last less and is less fulfilling.

“Love is two people dancing in the kitchen.”
If you know what I mean, then you will actually enjoy to a deeper level Martha & the Vandellas' song, brought back to fame by David Bowie and Mick Jagger ;)