Romanian mass protests: how we got here

In December 2016, during legislative elections, the Social-Democrats (PSD) won almost 50% of the seats in the Parliament. Liberals (ALDE) are the junior partner to form the Government (6% of the seats).

There is virtually no opposition. The conservatives from PNL (20%) are in deep crisis. The populists from USR (9%) have no clear ideology, except for publicly opposing corruption, while the conservative PMP of former president Băsescu (6%) also lacks a clear vision. The Hungarian ethnic party (6%) supports the governing coalition.

Romania is ruled by two executive institutions: The President and the Government. The current president is the conservative Iohannis. His role is mainly in the foreign affairs and to keep balance between the powers.

The Social-Democrats faced a problem: they had no candidate for Prime-Minister. Their leader, Liviu Dragnea, cannot be minister, since he was sentenced for electoral fraud. (however, the sentence let him free). He is also trialed for abuse. Călin Popescu Tăriceanu, the leader of the liberals, is also currently trialed. Dragnea becomes the speaker of the Lower Chamber, while Tăriceanu is the speaker of the Senate.

From now on, o long series of wrong steps is starting to occur with a surprising pace.

Wrong step #1.
Dragnea wants the power for himself. This seems the message that PSD transmits just before Christmas, when they designate a collaborator of Dragnea for prime-minister. The surprising proposal is Sevil Shhaideh, a lady of Tatar-Turkish origin. The proposal is rejected by the President, after media reports about the Shhaideh's husband – a Syrian supporting Bashar al-Assad, with a brother who has interdiction to enter EU…

Dragnea’s position is shattered. He steps back and propose another secondary party figure for prime minster. Sorin Grindeanu is accepted by the President, and gets the vote into the Parliament in early January. Hilariously, Shhaideh is designated as vice-prime-minister.

Wrong step #2.
However,  the new Prime Minister looks always like a puppet in the hand of Liviu Dragnea.

It snows heavily. The Government starts by cutting taxes and increasing salaries for public employees. Immediately after, the rumors point out to the Government preparing an amnesty for those suspected of using their positions for personal benefit or sentenced for corruption.

Wrong step #3.
On 16th of January, Liviu Dragnea denies all rumors. Two days later, the Government meets and intends to promote the law as an emergency ordinance. Although the law was not officially on the agenda, the President finds somehow, and comes uninvited to the Government. The law allows him to lead Government’s meeting if public security is on stake. However, it was not the case…

The proposed laws cannot be adopted with the President being there, therefore they are made public for the first time and they are announced as being subject to public debate.

In the meanwhile, on 21st of January Dragnea and Grindeanu attend the ceremonies of Donald Trump being sworn.

In the subsequent two Sundays mass protests are held in Bucharest and the main cities. On 22th of January, president Iohannis is among the protesters, in Bucharest.

Wrong step #4.
23rd January, Monday. Returned from the US, Dragnea looks nervous. He accuses some unnamed ministers that they did not understand the governing program in projecting the budget for 2017 (yes, Romania adopted the budget one month after the year started!). As usual, the Prime-Minister has nothing to say.

On 29th of January, about 50.000 protesters marched through Bucharest. Some other tens of thousands were on the streets of the main cities, as well as in Bruxelles, London, Paris, Rome.

200 interpellations are addressed to the law. They are apparently discussed on 30th of January.

Wrong step #5.
31st of January. In the morning, the trial in which Dragnea is accused of power abuse receives a postponement until 14th of February. Very late in the night, the Government has a meeting. They adopt the budget. By midnight, public learns from the Minster of Justice that Government favourably voted and they have already reinforced the law that weakens anti-corruption mechanisms. The law also looks like it exonerates many politicians from their any guilt. It is almost tomorrow when a couple of thousands of protesters are in front of the Government. 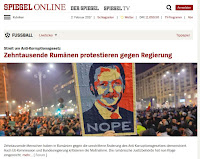 People wake up in the morning in a different country. They learn that the PSD leader and other corrupted politicians are likely to be absolved of any charges.

It is Tuesday, and tens of thousands will be on streets during night. The protest will continue every night. Wednesday, Thursday, Friday, ... preparing for Saturday …

Warnings come from 6 embassies in Bucharest (Germany, France, Canada, Netherlands, Belgium, the US), from berlin and Bruxelles. International left-wing media joins the right wing in criticizing the decisions of Romanian Government.

Starting Thursday, several top-level PSD members resign or publicly oppose the party. They include a minister, an euro-parliamentarian, two former members of the government, several heads of county organizations, a vicepresident of the party.

Wrong step #6.
Dragnea accuses everyone of manipulation and disinformation.

Flashback. It was cold in December 1989 when Ceaușescu accused everyone of disinformation, of being manipulated by foreign intelligence services, offered a raise in pensions, organized a counter-manifestation…

PSD starts an online petition for supporting Government. They simply forget that Internet literacy does not help their supporters: the opposing petition reached three times more signatures. PSD also threatens with a counter-manifestation.

There are too many similarities. There are obvious signs that the party is about to implode.


Surprisingly, there is no survey to publicly document the evolution of voting intentions. It is unlikely that PSD lost a lot, but its leaders seem scared. They are probably far from being rational anymore. Few have slept in Romania in the past 4 nights more than a few hours. And this shows.


The whole story looks like a long series of self-destructive steps. They were made by a party who otherwise had a comfortable four-years ruling ahead, and had no reason for hurrying up in any direction. One may suspect either they were actually unprepared to rule, either they simply executed the orders of a single men, unsure, with low intellectual abilities, and a dubious past.

On Saturday, Dragnea considers the possibility to revoke the laws. Several important figures in his party get public to admit the error of supporting the laws. The pace of the events reminds me of December 1989.


Nevertheless, there is a huge stress within PSD. Public accusations have to be faced. European criticism is obvious. Loyal media started to switch arms. On the other hand, there are the privileges to be defeated. For many of the party important figures, there is also the fear of being inquired for corruption. In other words, the comfortable 50% seats in the Parliament did not paid off, but actually turned into a nightmare. With people leaving the party or (timidly) questioning Dragnea's leadership, they feel the pressure to act quickly.

At this stage, only one happy-ending seems possible for PSD: to get rid of Dragnea. Such a long series of steps on the wrong foot entitles the decision.

14 months ago they lost power after mass protests which accused, as today, heavy corruption. Their leaders will definitively have difficulties to explain members and even families how they got in the current situation. They need an scapegoat. Which they actually have. Would they take the risk?
- februarie 04, 2017